Students from Central and Eastern European universities qualify and network

18. March 2019 – The new HAURATON EUROPEAN STUDENT PROGRAM, or HESP for short, is celebrating its first achievements. Only a few months after the establishment of the academic young talent program for students and professors in building technology faculties from eight Central and Eastern European countries, it has already resulted in the formation of strong networks between the company – based in the Baden region – and participants from Croatia, Slovenia, Serbia, Slovakia, Bulgaria, Hungary, Romania and Moldova. The scientific cooperation has also produced initial research results.

A degree with the HESP forges connections for the future
The dissertation of Toni Udovč, a Slovenian Hydrotechnology student at the Faculty for Civil Engineering, Transportation Technology and Architecture in Maribor, represents one of the success stories. In early summer 2018, he took part in one of the first two events at the HAURATON headquarters in Rastatt. At the practical training held there, he quickly caught the attention of the German experts with his competence and communication skills. The students were tasked with planning a specific drainage solution and a suitable channel solution as well as calculating the installation costs of this, and then presenting a full solution to the body of experts. This one task resulted in many solutions. The students played around with numerous relevant HAURATON products for the single project and efficiently applied them in very different ways. For Toni Udovč, his experience continued even after the intensive professional dialogue in Rastatt. He not only consolidated his professional knowledge of English within a short period of time, but he also started a thesis – guided by his mentor Matjaž Nekrep Perc and in conjunction with HAURATON – with the title “Drainage and Retention of Rainwater in Urban Areas”. As part of this, he used a drone to collect and analyse consumption data from the Slovenian town of Maribor for the renovation and drainage of a transport corridor. With the DroneDeploy platform, he transformed the data into a 3D model to then create the hydraulic calculations and cost estimations together with HAURATON. This resulted in him finishing with the top marks and gaining a Bachelor of Civil Engineering degree. The project not only provided him with academic prestige, but also strengthened transnational contact between him and the others for the future – which is exactly the aim of the HESP. The scheme brings together (prospective) experts from different countries to impart knowledge for the specialised tasks of the future and to create networks. Contacts and expertise must be developed transnationally as professionally implemented and successful drainage projects need high, internationally recognised standards in all countries.

“The scholarship holders of our promotional programme have qualified in a multi-stage selection process at their universities,“ says Senior Export Manager Ulrich Krause, who initiated the launch of HESP at HAURATON. “The demand for expert knowledge of drainage is very high in countries in Central and Eastern Europe.”

A platform for expert talent
In cooperation with the universities, students in the final stages of their degrees are targeted and offered presentations, excursions and practical workshops as part of the HESP. A practice-oriented programme, including challenges in channel installation or complex hydraulic calculations, awaits the prospective engineers in Rastatt, in addition to plant tours, seminars, workshops and discussions with German experts. An initiative like HESP is unique in professional circles. The next two workshops will take place at HAURATON in the middle of April and the middle of May in 2019. 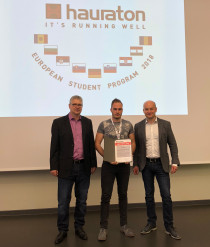