Environmental awareness in the town of Bühl

In Bühl in Baden-Württemberg, the new award-winning SPORTFIX CLEAN filter channel system from Hauraton has been put into action in the town’s first artificial turf pitch. This illustrates the town’s high sense of responsibility towards the environment in its urban planning. This is because abraded material and other microparticles from artificial turf pitches can reach water bodies and therefore the food chain too, in large quantities, if they are not properly collected.

The current discussion about microplastic contamination through the discharge of particles from artificial turf surfaces led to particular attention being paid to the environmental compatibility of materials during the planning stage in Bühl. Channel filters from Hauraton were therefore selected for the surface drainage. Their task is to quickly and reliably drain water from the sports pitch and retain the discharge of microplastic particles from artificial turf at the same time.

Using cork reduces microplastics
The project for school and community sport sees Bühl modernising its pitch, which was a hard cinder one until now, and using cork as an infill material so that discharge of harmful microplastic can be reduced. In addition, the fact that the new artificial turf pitch has been equipped with the SPORTFIX CLEAN filter system from the start and will therefore not a be polluter at any point, is exemplary. But artificial turf pitches that have existed for a longer time, which do not yet have an integrated filter system, can also be easily upgraded with SPORTFIX CLEAN. Responsibly acting owners or operators can make them suitable for environmentally friendly use on a long-term basis. The filter solution was brought to the market by Hauraton in 2019 after years of research and development work and was awarded the Baden-Württemberg environmental technology prize in the same year.

Retaining microplastics and contaminants
In Bühl, SPORTFIX CLEAN assures both drainage and filtering. The planner responsible for the project, Carlo Lehmann, is thrilled with the new solution: “In general, we want to keep all contamination out of the water to be drained. The most important task is filtering out the microplastic and other contaminants. With the surface filter, 98.5 percent of harmful materials and plastic particles are retained. What’s more, the cork infill material is also collected.” With Sportfix Clean, the operator can rely on safe functioning of the drainage and cleaning systems with low maintenance requirements over decades.

Simple installation
On the former hard pitch in Bühl, the constituent elements such as the old drainage system and the surface coating were removed as a first step. The subgrade - or planum - was then created for the new channels. Starting at the trash box, the channel runs were placed along the edge of the playing field on a concrete foundation and stabilised with a backrest made from concrete. Fitting elements for channels and gratings were produced with conventional tools directly on the construction site. After the channel run was completed, the pre-assembled drainage pipe could be laid at the outlets, starting at the trash boxes. Filling with the filter granulate was then possible. The filter material was removed with a strickle and therefore set at a uniform level. The gratings were inserted and screwed in using a locking handle system. The Sportfix Clean system was then ready for action. After the drainage lines were recompleted on the pitch, the artificial turf and the cork granulate were applied.

How does the channel filter work?
The SPORTFIX CLEAN System is a channel filter with which microplastic discharge, plastic blades of grass which have broken off and infill material from the artificial turf pitches are caught and permanently retained. The channels are installed on both longitudinal edges of the playing field in Bühl. The system consists of a channel body with grating, a textile-coated drainage pipe and the patented filter material Carbotec 60. The mineral and frost-resistant substrate works according to the principle of surface filtration and retains the plastic particles washed out by the rain. A large proportion of particles, which are transported to the edge of the playing field during play, fall into the channels and remain on the surface of the filter granulate.

The filter area produced at the edge of the playing field of the sports pitch in Bühl totals 20 square metres. Large amounts of solids can be absorbed and retained by this area. The system also works during heavy rainfall and is designed to dry out. This means that the channel filter is not permanently filled with water which prevents rotting processes and the dissolution of contaminants. 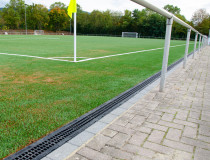 The SPORTFIX CLEAN channel filter system is in use on the sports field in Bühl. 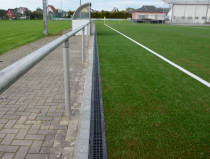 The filter surface created at the edge of the playing field adds up to more than 20 square meters on the sports field in Bühl. This allows large quantities of solids to be absorbed and retained.

The connection to the sewer system is made via the trash box. This blends inconspicuously into the channel system. 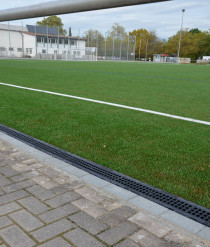 Starting at the trash boxes, the channel lines were placed along the edge of the playing field on a concrete foundation and stabilised with a concrete back support.
Home
News
Press
Filter channels on the new sports field retain microplastic and cork