Service channels and drainage systems for TV Garden in Mainz

When ZDF gave its TV Garden a structural makeover, Baden-based drainage specialist Hauraton was on hand to supply channels for the ‘ZDF Pool Stage 2020’ project in the Mainz broadcasting centre. The open air site in Lerchenberg has been used for the popular open air broadcast of Zweite Deutsche Fernsehen since 1986, and has been continuously expanded and developed ever since. Up to 6000 visitors can watch the broadcast live on site; a wide variety of events also take place in the area. Using the spectacular pool stage, presenters, musical acts and other shows can be held on a technically complex stage construction above an attractive pool, directly in front of viewers.

A brief history: ZDF has been based at Lerchenberg, a new site that was developed at the time, since 1964. The broadcasting centre was built on the open spaces of the mountain ridge above Mainz city centre, and the TV Garden is right in the middle – where the entertainment programme of the same name has now been transmitted from live every Sunday afternoon during the summer months for the past three decades. Up to 21 programmes are produced every year.

Lay cables quickly, keep routes free of obstacles
The service channel Faserfix Super 150 was selected from the Hauraton range for the ZDF Pool Stage 2020 project. The requirement: Cables and pipelines must not be routed across paths during events and television productions. They should be able to be installed quickly, and then removed just as quickly. This is to keep access routes safe and easily accessible, which is needed for setting up technology, stage equipment and furniture for spectators. The service channel Faserfix Super, with a solid cover in the E 600 loading class, makes this possible. The service channels allow lorries, forklifts and other vehicles to cross. At the same time, pedestrian or rescue routes can also be used without obstructions during events.

The covers are locked with the screwless Side-Lock locking system. This means that they can be quickly opened, and cables and pipelines installed, without any tedious unscrewing. They can be removed from the system just as quickly. When installing the channels, this simple opening and traffic-safe locking method is extremely effective. It also helps to save time by up to 90 per cent when fastening and loosening gratings.

The major advantage: All of the various channel systems mentioned above have gratings with the same appearance. This creates a seamless overall image, in spite of differing requirements.

In the Faserfix Super media channel with a closed cover, cables and lines are routed to the pool stage in the ZDF Fernsehgarten. 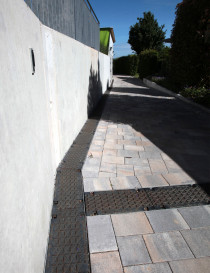 Cables and lines are temporarily laid in the service channels and routed safely to the stage area. 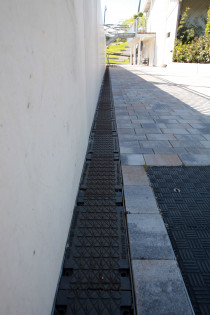