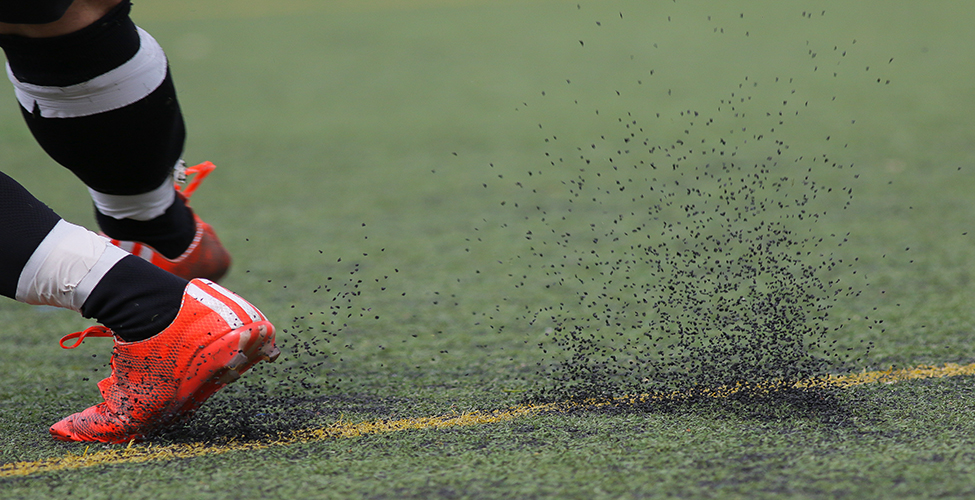 Microplastics are plastic particles that are five millimetres and smaller. The particles are often so tiny that they are hardly visible to the human eye. This is why the description "invisible microplastic" is often used in the media.

1.1 Origin and distribution of microplastic

Many people initially think of microbeads and microplastics in cosmetics, for example:

The biggest polluters are not known to many at all: The abrasion of billions of tires in road traffic and above all the countless sports fields made of artificial turf are one of the largest sources of microplastic pollution in our oceans.

1.2 Risks: Microplastic pollution harms the environment and our health

Nowadays the impact of plastic pollution on environment is detectable in all areas:

Microplastics are difficult to decompose. In the environment, the tiny plastic particles are subject to further fragmentation allowing them to even pass through modern drinking water systems. These particles often act as carriers of pollutants such as pathogens or heavy metals. Microplastic enters the environment via wastewater - through rivers into the oceans and then enter our food cycle via microorganisms and thus into our bodies as deposits. The health consequences and effects of plastic pollution for the human organism cannot yet be assessed. The avoidance or retention of microplastics from all sources is therefore absolutely essential as the most efficient measure.

Read more about the position of Fraunhofer UMSICHT regarding microplastics

You've seen this picture before: Tourists stroll along a white, fine sandy beach, the views get lost in the turquoise, crystal clear water. At least on the surface, but just below there are already mountains full of plastic waste and microplastic particles.

This ocean pollution destroys the holiday mood and the following thoughts come up:

Two tangible examples on these subjects:

Or less known so far:

2.1 What are the effects of microplastic pollution in the oceans? 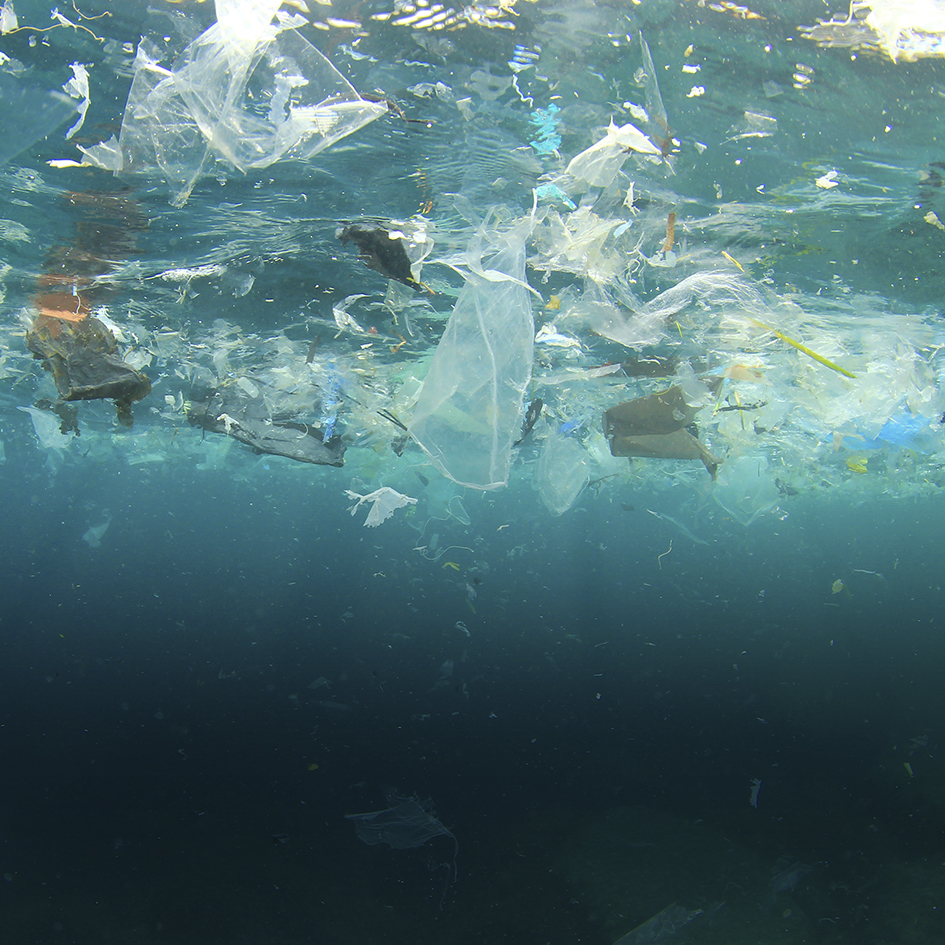 Why are plastics increasingly threatening marine ecosystems? Research in recent years has shown that microplastic parts and plastic waste in the oceans produce dangerous waste vortexes and huge garbage patches.

Here are some scenarios and consequences:

The Guardian: Learn why we first poison the ocean with the plastic in the sea and then ourselves. 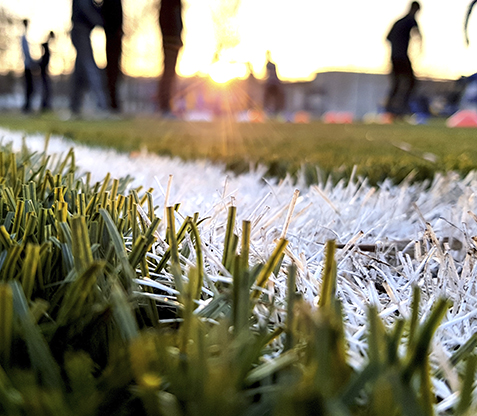 250 to 300 kg: This is the amount of microplastic that is discharged every year from a modern artificial turf pitch. Currently, several tons of microplastics are released into our environment through the use of artificial grass - provided the particles have not been filtered out and retained beforehand.

More and more artificial turf is being used in sports field construction all over the world, because the synthetic surfaces

3.2 The problem: plastic granulate & synthetic blades of grass end up in the environment

Through precipitation, artificial irrigation, maintenance measures or simply due to athletes' use, microplastic particles of granulate and fragmented blades of grass ultimately enter the food cycle.

3.3 The construction of infilled artificial turf for football and rugby fields 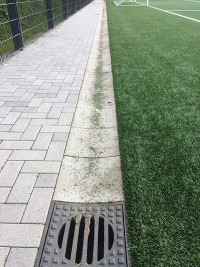 A distinction is made between two different types of artificial turf pitches: unfilled artificial turf and filled artificial turf, which is used in most cases. Most artificial turf pitches consist of several layers: A drainage layer with an elastic covering above it, followed by long synthetic fibres which are stabilised by a rubber granulate filling. This special rubber granulate provides the necessary cushioning and the desired characteristics on the playing field. Weather, wind, rain runoff and, above all, mechanical forces caused by high impact loads - such as in football or rugby - cause tiny particles to detach, blades of grass to break off and to then enter the environment. This results in a discharge quantity of 250 to 300 kg microplastics per pitch in the course of the year.

If you have ever played in a sports facility on an artificial turf pitch, you certainly know the problem: the small microplastic particles collect themselves in sportswear and shoes. Taking into account all relevant aspects (ingredients, recyclability and microplastic discharge behaviour), artificial grass cannot per se be described as harmful to the environment if appropriate filter solutions are used. However, once the problem is identified, it can be minimised by the following solutions.

HAURATON has a safe and effective solution for the filtration and retention of microplastic particles: In the drainage and filter system SPORTFIX CLEAN the filter substrate Carbotec 60 reliably retains particles as small as 0.45 µm (0.00045mm). SPORTFIX CLEAN is an important measure to help prevent microplastics entering waters and oceans. With a rule-compliant dimensioning, retention capacities of 98 % are achieved.

The system consists of the SPORTFIX CLEAN filter channel. In addition to the filter substrate channel surrounding the edge of the playing field, further products for collecting the microplastic particles can be installed.

The channel filter of the SPORTFIX CLEAN works according to the principle of surface filtration: not only the smallest plastic particles (>0,45μm) are retained on the filter surface, but also pollutants contained in the precipitation water (mineral substances such as sand and clay particles and organic components such as leaves, pollen and grasses). In addition, pollutants such as heavy metals or hydrocarbon and mineral oil hydrocarbons are filtered out.

The most important functions of SPORTFIX CLEAN are:

Not only surface water that flows off the playing field is contaminated with microplastics, but also larger microplastic parts that are transported to the edge of the field during play are reliably detected along the pitch. The water is collected and drained in the channel run. Meanwhile, it is led through the channel filter and filtrated.

The SPORTFIX CLEAN drainage channel absorbs 93% of rainfall. The remaining 7 % is discharged via a collection and overflow shaft in the trash box. In the trash box there is a special particle catching bucket which is lined with geotextile. This also cleans the water that enters the trash box unfiltered during heavy rainfall events.

The system also works during heavy rain events and it runs dry naturally. This means that the channel filter is not permanently filled with an accumulation of water, thus preventing the residue of pollutants and germs. The water purified by SPORTFIX CLEAN can be used to irrigate playing fields or grassy areas, therefore saving valuable drinking water. 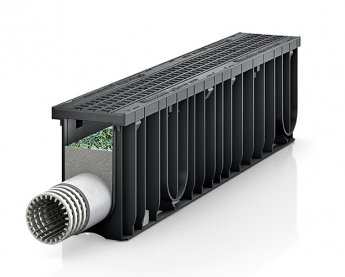 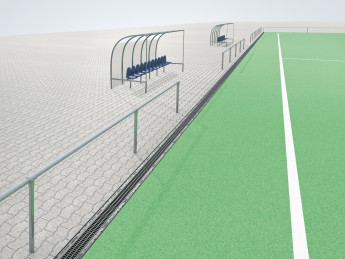 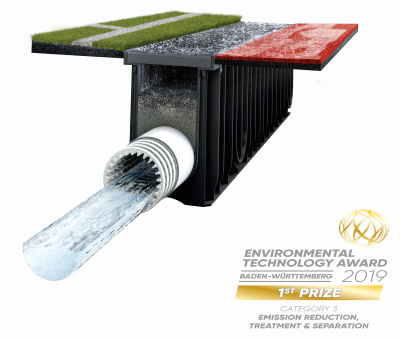 HAURATON has won the Environmental Technology Award Baden-Württemberg 2019 in the category Emission Reduction, Treatment & Separation with the filter channel SPORTFIX CLEAN. "As a specialist in drainage systems, it is important for us to make a contribution to a clean environment and to promote research and development. The award makes us very happy and encourages us to pursue further ideas for new environmental technologies", says HAURATON Managing Director Marcus Reuter.

Watch here the video about the SPORTFIX CLEAN filter channel

A large part of the granulate and the broken synthetic fibres stick to the clothes and shoes of the athletes. The SPORTFIX CLEAN particle trap element was specially developed for this purpose: Ideally, it should be installed at the player's exit where it collects and retains microplastic from the shoes and clothing. This also means that less microplastic gets into changing rooms and washing machines. 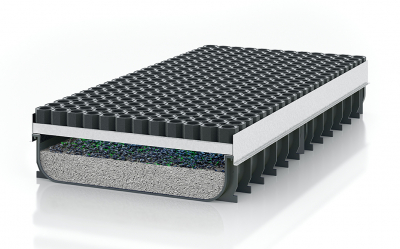 Installation of the particle trap element at the player's exit 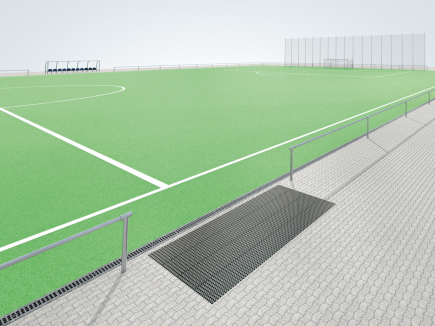 Artificial turf can also be used in winter. When clearing snow, however, the microplastic discharge is considerable and is dramatically visible as black deposits on the snow.

There is usually a snow collection point for the snow removed from the site. In order to collect the plastic particles carried out during snow clearing when the piles of snow defrost, this area is equipped with the SPORTFIX CLEAN snow trap channel. This collects and filters the melt water with the microplastic particles (granulate and broken blades of grass). The amount of microplastic that can be collected by this system is tremendous. The size of the collection point can easily be adapted to the local snow conditions. 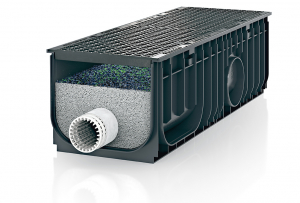 Application of the snow trap channel along the artificial turf pitch 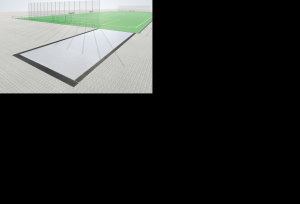 Difficulity in everyday life microplastics are removed during snow clearing 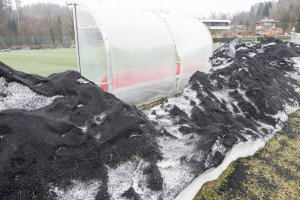 5. Benefits for operators and clubs with artificial turf pitches

5.1 Low additional costs and long maintenance intervals as security for operators and clubs

Since the filtration system is combined with the linear drainage, it results in only minor additional costs. The HAURATON filter system SPORTFIX CLEAN along the artificial turf pitch costs approx. 25,000 euros. In addition, there are costs for the installation which can also be paid for by the clubs themselves.

The system is proven to work reliably over long periods of time. The maintenance intervals are far apart and cleaning the filter is simple: after many years of use, a so-called filter cake forms on the filter surface. This is peeled off every three to five years during maintenance and only the removed filter substrate is refilled.

5.2 Application areas of the system

Whether football, hockey or rugby pitch - where artificial turf sports facilities are used all over the world, rainwater infiltration systems are usually also required. Not only surface water running off the pitch and contaminated with microplastic, but also microplastic parts transported by abrasion and wind are safely collected along the pitch. The water is collected and drained off in the channel run. The HAURATON filter system can also be retrofitted in existing rainwater systems.

Fabian Reuter, the idea generator and initiator of the product range, emphasises: "This guarantees long-term investment security for operators. Even when the artificial turf surface is replaced, the filter channel system can be maintained and reused regardless of the type of artificial turf used."