Welcome to the premium class of drainage systems!

Yas Marina CircuitIn addition to Sebastian Fettel, who crowned his still young Formula 1 career on 1 November with a victory at the seasons's final, another German winner is determined at the first race on the new circuit: the drainage system from HAURATON. 20 km innovative channel system that is laid out across the 170-hectare site – the biggest project in the company’s history.

Formula 1 racing involves incredible levels of power. As they cover the 56 laps of a race, Formula 1 racing cars can reach speeds of up to 320 km/h. It’s not just down to the driver and the car, but the quality of the track, too. The highest safety standards have to be met.

Two types of channel systems were used from the innovative HAURATON range for the surface drainage in Abu Dhabi: the RECYFIX HICAP Type G and the FASERFIX SUPER 100-300. The latter is also being used as a temporary cable channel system. The special T and X connections make laying the pipes an easy, flexible job. The RECYFIX HICAP channels, which deliver superior hydraulic performance, have slotted covers made of ductile iron, which makes them highly resilient. This has paid dividends for transport and installation, as the channels are highly reisitant to damage. This also makes them particularly suited for application at this special site, as the high speed of the cars generates a powerful suction effect. Binding and cover layers can be applied directly to the roadway, which makes implementation particularly viable. It’s also possible to lay the channels radial.

With such high levels of hyrdaulic power, the channels also take on the job of draining rain water along the track. An asymmetrical trash box construction located away from the track and an attractive-looking surface enable it to meet both technical and aesthetic requirements. High value has been placed on this luxury track - it’s not only the route through the harbour that makes racing in this ambitious Emirate every bit as good as the Monte Carlo Grand Prix.

Dropping the chequered flag on 1 November will mark the successful conclusion of a near two-year construction phase. HAURATON products have been installed around six months ahead of this date. The channels have already passed initial endurance testing with flying colours. In terms of construction, the final top layer of the driving surface won’t be applied until right at the end. A binding layer will be applied to the subsurface and base layers only. The final road surface is the prized feature of the race track, and heavy construction vehicles will not be allowed to go over it. During the construction phase, the binding layer also acts as a road surface. The channels were installed in the binding layer, where they protrude 4cm above the surface – the distance in height from the upper surface of the top layer that will be applied later. This means that they are greatly exposed to the impact of heavy goods vehicles during the entire construction phase. 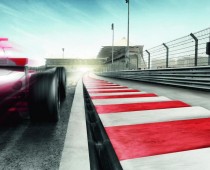 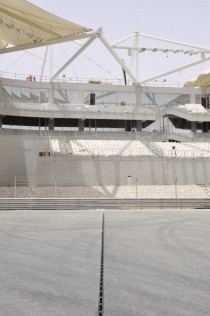 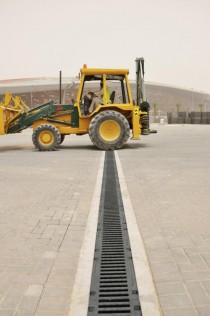 Home
Welcome to the premium class of drainage systems!