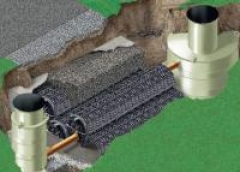 Right now one can only guess what will be the shape of developments at the village of Verdura near the town of Sciacca. The owners of a chain of luxury hotels, Sir Rocco Forte & Family Limited, are investing in a top class hotel situated within a 45-hole golf course right next to the sea. The design of the precinct will incorporate some historic buildings that reflect the history and character of Sicily. The complex will comprise a hotel with 200 suites and rooms (all with sea view), two championship golf courses, a large spa area covering 2000 square metres as well as various sports facilities.

All buildings will blend harmoniously with this green oasis, adapting to the topographic features of the site. The roofs of the bungalows will planted. In terms of ecology, the project also meets the most modern requirements: storm water from the roof areas will not be drained away into a central canal system but allowed to soak away in a decentralised system.

Initially, the specification called for a pipe-based infiltration system. However, the difficulties associated with this type of system soon became apparent: the pipe runs have to be embedded in large quantities of gravel, which have to be obtained from the mainland and shipped to the island (for environmental reasons it is not allowed to quarry gravel in Sicily). In addition, this system needs large available areas. In order to obtain the calculated volume for the infiltration system it would have been necessary to carry out extensive earth movements.

In view of these facts the HAURATON Italia team, headed by Pasquale Spinelli (field sales HAURATON Italia) and Francesco Buschi (project engineer HAURATON Italia), worked out a comprehensive alternative: an infiltration structure based on DRAINFIX TWIN infiltration blocks. The Italian team obtained technical support from Dipl.-Ing. (BA) Rainer Schaible, the infiltration specialist from the central HAURATON office in Rastatt, Germany. After initial discussions with the project leader in charge in Milan, the DRAINFIX TWIN system was presented and it became clear very quickly that this was the right solution. Based on the relevant geological and precipitation data, several alternative solutions were calculated, leading to the construction of the final solution involving 9 different-sized infiltration structures. 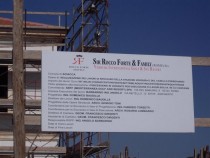 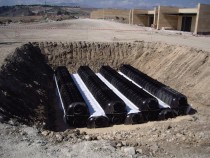