It was the 2nd of October 1948, on a converted World War Two airfield near the village of Silverstone, Northamptonshire, the Royal Automobile Club hosted its first Grand Prix on a new circuit. The winner of this inaugural race was Luigi Villoresi in a Maserati, who recorded an average speed of 72 mph and claim the first prize of £500. Over the intervening years the Silverstone circuit has developed into the UK’s best loved motor racing venue.

In 2009, planning permission was granted to owners, the British Racing Drivers Club (BRDC), for a new pit and paddock complex at Silverstone. Around £35 million has been spent over the last two years on the Silverstone Wing and a new circuit configuration which included the relaying of the surface. The focal point of the redevelopment is the 390 metre long pit and paddock start line complex that runs between the famous Club and Abbey corners – the complex is now known as the Silverstone Wing. The spectacular yet functional structure was designed by Architects at Populous, a highly respected global practice. Above the 41 garages at ground level, Populous have created quiet, climate-controlled V.I.P. spectator galleries and a media centre with vistas of the pit lane and the circuit beyond - the “Wing” provides top class facilities for racing teams, media and guests during Blue Riband events. The building also houses 4000m² of glazed exhibition space, a 2000m² conference centre and a 100 seat auditorium.

The Silverstone master plan incorporates re-designed spectator facilities, corporate grandstands, commercial outlets, a technology park, an educational campus and hotels that will eventually provide a year-round leisure venue to rivalling any in the UK.

The Silverstone Wing was officially opened on the 17th May 2011 by The Duke of Kent and the BRDC president, Damon Hill. The presentation ceremony was attended by key figures from the world of motor sport.

Three HAURATON products were supplied for installation in and around the Silverstone Wing complex. To provide the surface water drainage requirement RECYFIX HICAP and FASERFIX SUPER KS channels were used with FASERFIX SERVICE CHANNELS installed to facilitate on-site cable management.

RECYFIX®HICAP® CHANNELS high capacity surface water slot drainage channels
To provide the surface water drainage requirement in the racing teams’ vehicle park located behind the complex, RECYFIX HICAP 200, 300 and 680mm standard units were supplied. A total of 894 metres were installed in a cascading system. All the RECYFIX HICAP channel and inlet adaptor components used are made from the company’s 100% recycled polyethylene / polypropylene. Not only is no prime polymer used in the manufacture of RECYFIX channels but it is the shredded recycled material, not reformed pellets, that is fed directly into the injection moulding machines providing even more energy savings. Having a F900 loading category, the ductile iron inlets, are highly resilient to the twisting forces imposed by the racing teams’ support vehicles. Affording a superior overall hydraulic performance, the RECYFIX HICAP system allowed the projects contractors’ flexibility in road surface design and installation, reducing the number of channel runs normally required to drain a given area. This reduction meant less underground excavations, materials and vastly reduced installation time. As there were fewer runs required, the surfaces strength was not compromised whilst future maintenance and cleaning will also be reduced. To further reduce installation times, end-of-run caps and pipe connection sockets were also supplied with other connection points moulded into the sides and bottom of each channel.

FASERFIX®SUPER KS CHANNELS fibre reinforced concrete surface water drainage channels
500 metres of FASERFIX SUPER KS 100 channels were installed in the area overlooking the pit lane. These were fitted with Class C250 and E600 ductile iron HEELSAFE gratings treated with a corrosion resistant coating (KTL).This treatment is absorbed by the ductile iron allowing HAURATON to give a life time guarantee for the grating. A further 168 metres of FASERFIX SUPER KS 150 channels were used at other locations in and around the circuit. FASERFIX SUPER KS channels are made from the company’s fibre reinforced concrete and feature metal protection along their top edges, not only does this detail provide exceptional wear resistance and increased load bearing capability, unlike some products on the market, the channels are so strong, even prior to installation, they are able to endure the rigours of site work.

FASERFIX®SERVICE CHANNELS for on-site cable management
An essential requirement for any venue hosting national or international events such as Silverstone, safe cable management is essential to facilitate team, multi-media communication and TV broadcasts from the world’s television companies. The 1000 metres of FASERFIX SERVICE CHANNELS 200 installed, feature SIDELOCK ®, a patented boltless system that allows the non-slip Class E600 ductile iron covers to be removed quickly and re-fitted easily during cable laying and removal. Once a 500mm long cover is positioned over the channel, foot pressure is simply applied. A loud click is then heard which confirms the cover is securely locked. The cover can be removed using a large screwdriver inserted into a discreet leverage point. The system has proved to be 90% quicker than any other fixing method available. In practice, 10 metres of cover can be removed in about 90 seconds with just 70 seconds to replace all 20 covers.

Given that Silverstone was HAURATON’s biggest UK project of its type, the company’s Project Engineer, Peter Dicken was allocated to support the contractors. “Motor racing at this level involves a massive effort from all those involved. With cars reaching an average speed of 230 km/h, the performance levels achieved are not just down to the drivers and their back-up teams - to go fast, the quality of the track and support facilities are crucial. Having been involved in similar projects overseas, notably the Yas Marina motor racing circuit in Abu Dhabi, our company were able to reassure the project’s engineers and contractors our products would meet their highest safety standards. For example, we were able to give the engineers involved in the design of the pit lane the strongest assurances that our channels would comply with the performance criteria demanded in terms of operational safety, materials, handling and longevity”.

Tim Connolly, HAURATON Sales and Marketing Director comments about the project, “We are pleased that the Silverstone Wing project has been such a success and delighted to have contributed to its rapid progress; the build programme, from start to finish took 54 weeks. We are happy the main contractor, Buckingham Group Contracting Limited reported all our products were easily installed and that there were no breakages on site”. 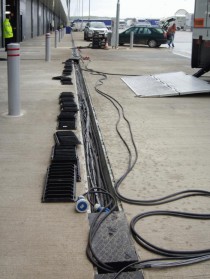 Cable in FASERFIX SERVICE CHANNELS in front of team garages 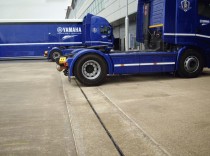