Ready for kick off: The Polish stadiums are fit for Europe's biggest soccer event of the year. State-of-the-art drainage channels from HAURATON makes sure that neither the professional soccer teams fighting for the title, nor the fans will get their feet wet during the EURO 2012 games in Poland.

"Our products convinced the stadium planners in Poznan, Gdansk, Warsaw, and Wroclaw" said Marcus Reuter, Managing Director of HAURATON. "In this way, HAURATON will ensure fast and reliable surface drainage in all four Polish soccer stadiums in which this year European Soccer Championship will take place."

Apart from modern building products for underground, garden and landscape, and aqua construction, rainwater mangement offers its own program, specifically developed for use in stadiums and other sports facilities. The products from the SPORTFIX range meet the requirements of sports associations and are permanently adapted to the currently valid international standards. The special technical construction of the products prevents injuries

Drainage systems from HAURATON are not only eficient, but are also durably reliable. They are easy to install and optimally drain rainwater. A total of some 22 kilometers of innovative drainage channels were installed during the construction of the four Polish soccer arenas. The company from Southern Germany provided the Polish European Football soccer stadiums, among other products, with the classic FASERFIX SUPER Channels (channels made of fiber-reinforced concrete with high lateral stability) of different design, RECYFIX HICAP channels and AQUAFIX separators. The installation on site has been completed long ago. The overall contract volume amounted to nearly three million euros.

The four Polish stadiums in brief:

The new stadium in Gdansk seats around 44,000 spectators. During this year's European Championship it will serve the German national team, which will move into its championship headquarters on the Baltic Sea beginning in June, as training site. Here, some eight kilometers of drainage channels type FASERFIX SUPER KS (made of fiber-reinforced concrete) with integrated EP locking system to guard against buoyancy were installed. The lawn is edged with concrete SPORTFIX Dish channels as demarcation line between soccer field and running track.

Drainage channels from HAURATON were also the first choice for the construction of the national stadium in Warsaw, thanks to their maximum lateral stability achieved with fiber-reinforced concrete and their long service life. This stadium is also the site of the opening game on 8 June 2012. Channels of type FASERFIX SUPER KS were used for draining the central space, the parking structure, the parking lot, and in fitting the tiers. In addition, recyclable PE channels type RECYFIX STANDARD with slotted covers were used inside and outside the stadium.

In the modernized multifunction arena in Poznan-  at spectator capacity of about 46,000, it can in future also be used for other sports and cultural events - approx. 1,500 meters of FASERFIX SUPER KS channels from HAURATON were installed. They drain the rainwater into the AQUAFIX separators, also from HAURATON, in which the runoff is cleaned, before it gets into the DRAINFIX BLOC infiltration system through which it can seep into a total of four rubble drains.

The stadium in Wroclaw seats over 40,000 spectators. In it, three group stage matches are expected to be held. Here, an innovative drainage system from HAURATON of five-kilometer length was installed. A special eye-catcher: The facade of the sixstory structure is enclosed in a net of fiberglass and will be illuminated in the national colors of the Polish team when it plays. 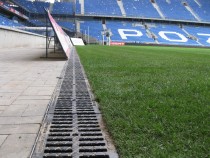 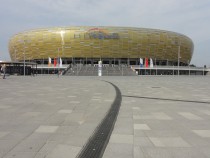 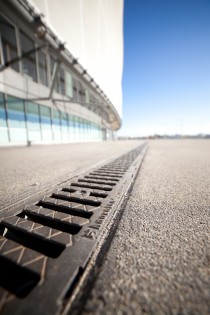