With the development of around 160 building plots, the town of Walldorf, in the southwest German state of Baden-Württemberg, is extending its provision of attractive building areas. South of the present municipality, the development area of Walldorf South is emerging in the immediate vicinity of the software company SAP. The first of three phases of development planned is in the centre of the new district and covers around eight hectares (20 acres). It comprises the “New Social Centre”, which is intended to combine old and new Walldorf. Two further sub-developments are planned to the right and left of this, which will be embarked on at a later point in time.

In building the new district, the local council and planners are pursuing long-term objectives. The public green spaces, southern park, rainwater seepage and other compensatory measures are integral parts of the ecological concept. Numerous trees and extensive fields will give the southern park its character. The rainwater seeps away on the spot, partly in infiltration swales, partly in underground infiltration ditches.

Rainwater that tends to collect on the surface of roads and parking areas needs to be treated before it re-enters the ground water via the infiltration system. Solutions in the past have normally been achieved by means of living soil layers (vegetated swales). In Walldorf they have decided for the first time on a completely new system: the DRAINFIX CLEAN filter substrate channel system from HAURATON. This system combines drainage and cleaning tasks in a single product. The rainwater is collected in a channel with a nominal width of 300 mm and subsequently passes a filter substrate integrated in the channel. This is where the treatment occurs: well over 90% of the particles carried by the water with a size of only 0.006 mm are effectively filtered out. The purified water runs off, via a filter mesh pipe at the channel base, into the infiltration ditch and seeps away here.

With rainwater treatment by means of a living soil layer, approx. 2000 m² would have additionally needed to be provided in Walldorf for swales – despite a price of approx. 250 euros per square metre. In addition, as regards the swales, soil replacement to a depth of up to 3 metres would have been required, as the topsoil is virtually impermeable due to its clayey constituents. The costs incurred by area loss and soil replacement would have been many times higher than is now the case with the implementation of a filter channel integrated into the roadway. Added to this is the fact that vegetated swales need to be tended several times a year, e.g. by having the grass cut or, where necessary, having the accumulated litter removed, whereas the maintenance of the DRAINFIX CLEAN, with proper handling and regular road sweeping, is not required until after 20 years or so.

DRAINFIX CLEAN is one of the most powerful small filters used in the treatment of rainwater from a hydraulic and material viewpoint. The filter substrate channels with nominal widths of 300 or 400 mm and with an additional retention height of over 20 cm have a total retention volume of 75 l and/or 110 l per running metre. As a result, despite the slow filter speed required for high material retention, excellent hydraulic performance is achieved. The FASERFIX SUPER channel bodies have also received general approval from the German building authorities and can withstand loads up to Class F 900 in accordance with the standard DIN EN 1433. They are therefore suitable for use in areas of heavy traffic and are permanently stable and durable.

The work to the development area in Walldorf is so far advanced that the installation of the DRAINFIX CLEAN channels are by and large concluded. After, first, the channel bodies were laid and, then, the road surfaces were finished, several days ago the filter substrate CARBOTE 60 and the filter mesh pipes were installed. Until the total completion of the civil engineering works, the substrate has been covered over with geotextile fabric by the building contractor in order to prevent soiling. If the site development should progress at such a pace, in a few weeks construction will begin on the first homes, and the new residential area will come alive. 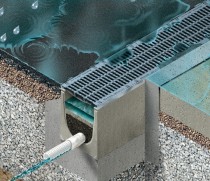 Home
New approaches to the treatment of rainwater in Walldorf